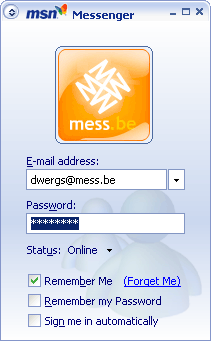 Thought it was gooseberry season in the MSN Messenger universe? Think again, a new MSN Messenger BETA has been released to selected BETA-testers, including KebecoiS and sk8michael who were so kind to provide us with the first-ever screenshots of MSN Messenger 7.5 BETA. The bug/feature/leak-hunting season has opened, y'all!

First screens first, the sign in screen has been redesigned. If you tick the Remember Me option, it will show your MSN Display Picture and automatically fill in your e-mail address. There are separate options for saving your password as well, or sign in instanteneously altogether.

Not much changes in the main window: the Add a Contact has been replaced at the top of the Contact List (rendering the bottom "I want to" actions pane obsolete) and the My Space button is now titled My MSN Space.

Arriving in the conversation window, the Webcam and Audio buttons are now renamed to Video & Voice and the Video button also has a new symbol. A completely new feature we announced before are the Voice Clips, which enable you to send voice messages (or whatever you sample, really) by holding the button (or hold F2) and recording through your microphone. Yelling your contact's name sounds like a good alternative to the Nudge button. Obviously, this feature only works if both contacts own MSN Messenger 7.5.

UPDATE: Voice clips can last up to 15 seconds, but their quality can be rather mediocre depending on the input. Luckily, they do not automatically playback when received and you need to press the Play button first.

Bloat-alert: just like MSN Display Pictures, conversation window backgrounds can now be dynamic. While I have yet to see it in action, I can imagine many an epilepsy seizure caused by these Dynamic Backgrounds. I don't think anyone was waiting for this feature, but according to KebecoiS: "the animation is more pleasant [than Winks], the text color matches it so you can still see it clearly and it's not just annoying". Two Dynamic Backgrounds from Blue Mountain are included in this BETA. One has a fish swimming, the other shows world clocks (though according to Mini-Me the times shown on the clocks are not accurate, screenshot by sinuz). UPDATE: Want to see them in action? Here's a a video preview of Dynamic Backgrounds. As reported by SAM and balupton, free animated backgrounds can be downloaded here.

Digging further, the Connection TroubleShooter is said to be more comprehensive. In the Security options you can now chose to disable hyperlinks in conversations (a protection against IM worms), disable Voice Clips and allow MSN Messenger to fire up a conversation window if you click a link in your web browser (the conversation link feature has likely been reinstated for use on MSN Spaces and Hotmail Kahuna). And in the Alerts and Sounds options, you can define a sound to be played when invited to an audio conversation. UPDATE: By default, it's two times a classic phone ring.

Finally, some bad news for the pre-XP generation. According to XxRebelSeanxX on the forum, the MSN Messenger 7.5 setup only supports Windows XP. There's a small chance that this issue is limited to the BETA.

UPDATE: The MSN Messenger 7.5 BETA-period will take place approximately six weeks during July and August. That's a final release in September, then?

UPDATE 2: Several screenshots and facts have been added. Check the above post for the word UPDATE. Keep checking the news as we continuously update.

UPDATE 3: Quick facts...
- Messenger Plus!, CustoMess and IEDP 2 are all compatible with 7.5. The release of a Mess Patch for 7.5.0160 is still uncertain and depends on the demand is scheduled for tomorrow.
- The Busy nudger bug is still present, as is the .pif group conversation kicker.
- The chat area of the conversation window now comes with a slightly gradient background.
- In the same conversation window, a tiny webcam icon underneath the Display Picture reveals whether the contact has installed a webcam (reported by Huuf).
- When you apply a Dynamic Background the Nudge sound will change according to the background's theme (reported by SAM). Sometimes a Nudge is even accompanied by a Wink-sort-of animation.
- Some Winks now have a maximum size and don't stretch out with the conversation window size (reported by Fr@nKy.
- Just like we did during the MSN Messenger 7 BETA, we're compiling a list of MSN Messenger 7.5 bugs.

If you have any other news or revealing screenies, share them with us!

NEW #1: Two days after the first private MSN Messenger 7.5 BETA, Microsoft already issued a new build to its English testers numbered 0162. The only change is said to be a (visually) improved Audio and Video setup.